Invites you to join us

To Celebrate the
INTERNATIONAL DAY OF HELLENISM

REFRESHMENTS WILL BE SERVED AFTER THE PROGRAM
PLEASE RSVP TO This email address is being protected from spambots. You need JavaScript enabled to view it. OR 847-674-1773
PLEASE BE RESPECTFUL OF OUR SPEAKER AND ARRIVE PROMPTLY

With this memorial the Hellenes of the United States exoress our
clemanov an resoecitorthe historv or our two countries."
ERECTED BY THE AMERICAN PHILHELLENES SOCIETY • APRIL 2021 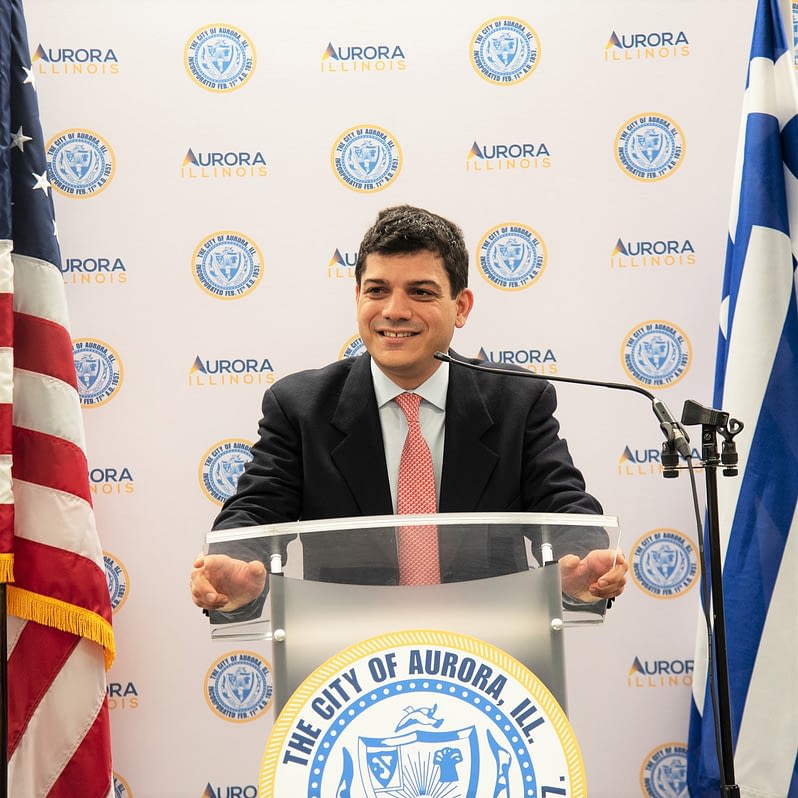 The crowd cheers as a memorial is unwrapped Saturday at Wilder Park in Aurora that was given to the city by the American Philhellenes Society. (David Sharos / The Beacon-News)

City officials, leaders of Greek churches and societies and more gathered at Wilder Park in Aurora Saturday for the unveiling of a new monument that was installed in honor of the 200th anniversary of the Greek Revolution.

The $100,000 20-foot monument was provided by the American Philhellenes Society – a Chicago-based non-profit organization that a press release from the city said was “established to identify, highlight and honor Americans who supported or fought for the independence of Greece during the years 1810 to 1840.

The monument itself is said to weigh 20 tons, officials said.

The group contacted the city late last year seeking permission to install the monument here in Aurora given it is the state’s second-largest city and “because of Aurora’s stalwart commitment to diversity and inclusion, and in collaboration with Aurora’s thriving Greek community.”

Aurora Chief Communications and Equity Officer Clayton Muhammad said the city has “always looked at Aurora as one Aurora community” and “being able to erect a monument is significant in honor of those who led the Greek Revolution as well continue the work of connecting Greece in America.”

His Eminence Metropolitan Nathanael of the Greek Orthodox Metropolis of Chicago addresses the crowd Saturday at Wilder Park in Aurora before a new monument was unveiled behind him in honor of those who fought in the Greek Revolution. (David Sharos / The Beacon-News)

“Aurora’s Greek community has been significant in the forward movement of Aurora for quite some time and certainly under this administration,” he said. “We look forward to showing the city’s commitment to growth, to diversity, to inclusion. Diversity is a fact – inclusion is an act. This monument speaks volumes about the Greek community and its connection with Aurora.”

City officials are hoping some other organizations come forward to donate monuments, making that part of Wilder Park a monument area.

The ceremony on Saturday included appearances by Aurora Mayor Richard Irvin as well as His Eminence Metropolitan Nathanael of the Greek Orthodox Metropolis of Chicago, and leaders of the American Philhellenes Society.

Georgia Nikolopoulos, wife of Panagiotis Nikolopoulos, who is the president of the American Philhellenes Society, spoke on behalf of her husband, and said the society “has been working a long, long time to get this monument up and running.”

She spoke about the location of the monument and said in terms of it winding up in Aurora, “the city was much more welcoming.”

“We approached areas in Chicago and did not get a lot of positive feedback and the late Mayor (Tom) Weisner and now Mayor Irvin have just been open arms – welcoming and asking what do you need us to do - and get it up and going,” she said. “Aurora’s reputation precedes itself in terms of being welcoming and inclusive. Its location is central enough that everybody can really get here easily.”

City officials including Aurora Chief Management Officer Alex Alexandrou and Nikolopoulos said the monument and the history surrounding it “will be used as part of the curriculum in Aurora schools” and that it “will become a teaching tool.”

“This isn’t for my generation because theoretically we know it, but for my children, our grandchildren, and Greek or non-Greek,” Nikolopoulos said. “We think it’s a part of history people should know about.”

Illinois State Sen. Linda Holmes, D-Aurora, spoke before the ceremony noting that the monument reflects her own heritage as she is half Greek.

“It sort of speaks to the diversity and welcoming of Aurora,” she said. “This is a perfect place for it.”

Those connected with the Greek community including Angelo Dallas of Glenview said it was important for him to see the installation Saturday as a Greek-American himself.

“I think this is a good home for the statue,” he said. 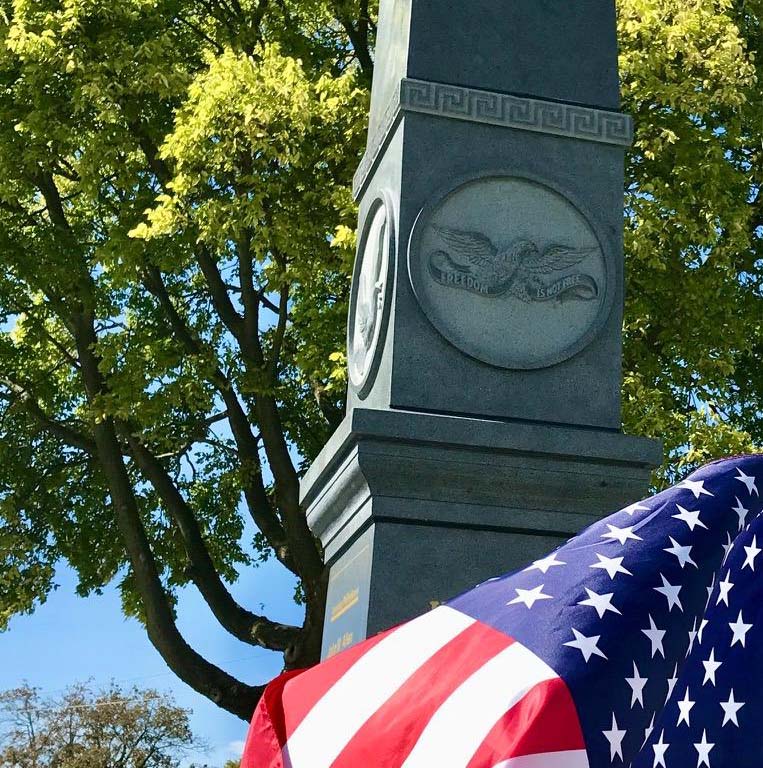 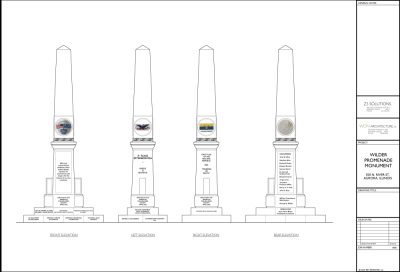 Email: This email address is being protected from spambots. You need JavaScript enabled to view it.

The American Philhellenes Society, the City of Aurora, Illinois,
and the Greek Orthodox Metropolis of Chicago invite you to the
dedication ceremony for the new

Please see the attached announcement for details.
RSVP by September 10, 2021 to
847-674-1773 or
This email address is being protected from spambots. You need JavaScript enabled to view it..

Proposed monument to Philhellenes to be dedicated in Wilder Park, Aurora, Illinois

Email: This email address is being protected from spambots. You need JavaScript enabled to view it.

The organization’s planned events for October 17, 2020 in Aurora, Illinois and on December 12, 2020 at the Skokie Public Library have been postponed due to the current health crisis and danger to the public.

As a reminder, the memorial monument to the Philhellenes is currently scheduled to be installed in Democracy Square, Wilder Park, Aurora, Illinois on May 29, 2021 coinciding with the celebration of the 200th anniversary of the Greek revolution.  We are grateful for the support of the Metropolis of Chicago and the City of Aurora and are looking forward to the dedication in the presence of civic leaders and guests.

Better and happier days are ahead and we look forward to your support.

The Officers and Board Members of the American Philhellenes Society.

THE AMERICAN PHILHELLENES SOCIETY
CORDIALLY INVITES YOU TO JOIN US
FRIDAY MAY 15, 2021 6 P.M.

Proposed monument to Philhellenes
to be dedicated in Democracy Square,
Wilder Park, Aurora, Illinois
Spring 2021 on the 200th
Anniversary of the Greek Revolution

CORRECTED PHONE NUMBER
RSVP BY SEPTEMBER 10, 2019 TO: 847-674-1773 OR
This email address is being protected from spambots. You need JavaScript enabled to view it.
PLEASE LEAVE YOUR NAME, PHONE NUMBER AND NUMBER OF
INDIVIDUALS ATTENDING
THE PROGRAM WILL BEGIN PROMPTLY